The Guelph Nighthawks have set their roster for the 2020 CEBL Summer Series, with seven new players joining the five who remain from last year’s inaugural squad.

Here’s a look at the names called by Head Coach and General Manager Charles Kissi: 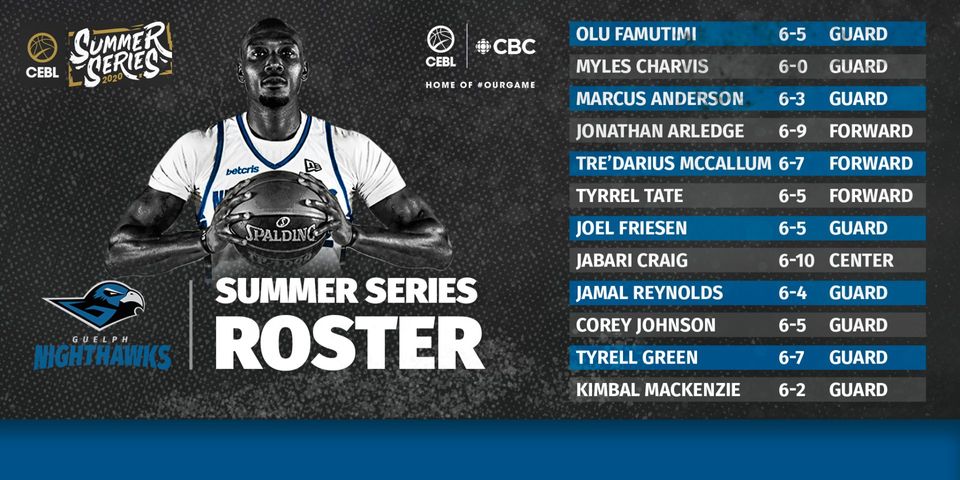 “I’m excited about the group we put together.  I think we have a good balance of rounded basketball players. Our guys have bought in and worked extremely hard over our training camp,” Kissi said.

“These guys are going to have to come in and compete every day,” he added. “It’s that type of daily competition that will help establish the winning culture we’re focused on building in this organization.”

As mentioned, the roster features five members of the 2019 team, including Olu Famutimi (who I wrote about here), Myles Charvis, Jabari Craig, Jamal Reynolds and Kimbal Mackenzie.

Here’s a few players I’m most excited to watch:

I’ve greatly enjoyed getting to know more about these players and their respective journeys that have landed them in Guelph, and I’m excited to see what they can do as a group over the next few weeks.

The CEBL Summer Series tips off on Saturday, July 25th with a nationally broadcast double-header (CBC), beginning with the Nighthawks versus the Ottawa BlackJacks at 3:50pm ET.

The Summer Series will culminate with the CEBL Championship on August 9th.